It’s hard to believe that a month ago today, the two of us were at the wedding of Robert’s sister Elaine and her husband Dan. We were honored to arrange the flowers for the ceremony and reception. We had initially planned on growing them, but we got a little ambitious with our garden plans, and the weeds got away from us. With help from Green Gardens, we pulled everything off amazingly well.

A little before the wedding date, we placed our order with Trent. The day before the wedding, we cut some flowers and greens from our property. Much of it was trimmed off our trees that needed pruning, or were actual weeds (they were primarily Queen Anne’s lace) from our lawn. They worked beautifully with what we ordered. A little later in the day, we got in touch with Trent and he let us know that he had our flowers and filler cut and waiting in buckets for us. The arrangements consisted of zinnias, a few dahlias, multiple types of basil, a couple types of celosia, gomphrena, sunflowers and cosmos. There were a few other flowers that we had in small numbers as well.

They were stored overnight in the basement at Robert and Elaine’s parent’s house. It was cooler there, and they would likely hold better. We were very happy with how that worked out. Robert spent much of the morning with the groomsmen while I did the flowers with the help of Elaine’s friend Gretchen. She was a lifesaver! It can be said that I don’t do well under pressure, and an extra set of hands and eyes, and a kind voice were so welcomed.

The flowers started with the bouquets for the bridal party to carry. I wanted to make sure I used the prettiest flowers first. Elaine’s bouquet took some work, but eventually I got it. Gretchen wrapped the stems with twine and gave them a great polished look. We trimmed the stems so that Elaine’s bouquet was a little longer than the rest. It looked amazing.

After the important bouquets were finished, we worked on the 55 or so centerpiece arrangements. Elaine and many family members and friends had been looking for small bud vases and jars for almost two years before the wedding. They looked lovely together, and were fairly easy to arrange. 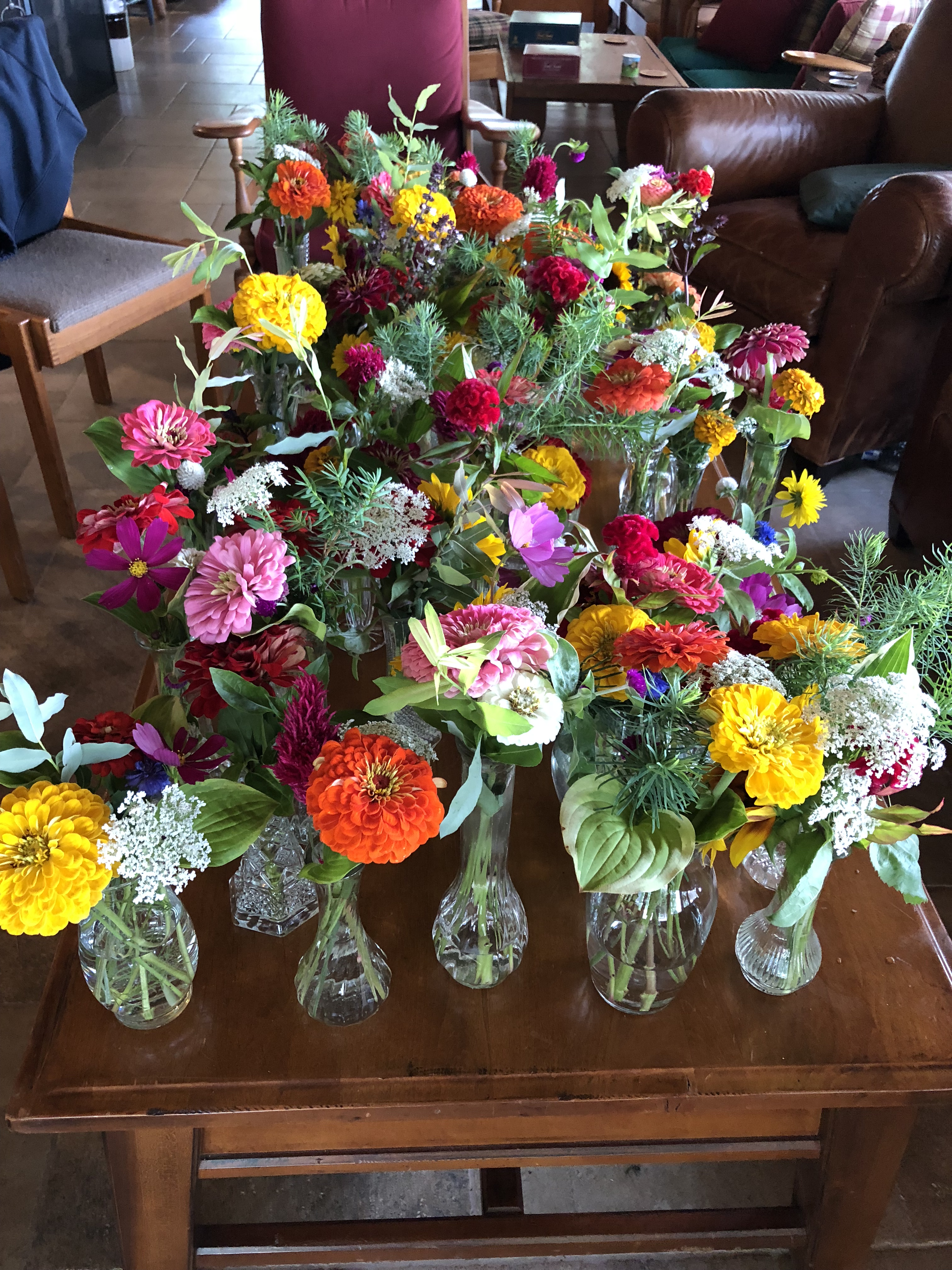 All together on one table, they were a sight to see! I got so many compliments on them, and I really enjoyed myself. It was stressful, as I didn’t want to disappoint Elaine and Dan, but in the end, it went really really well. Other than the flowers, vases and twine, the only things we needed were loads and loads of floral tape, and some super sharp flower snips. Arranging flowers isn’t the most complicated thing in the world, but it definitely takes some practice. I look forward to more opportunities to work on it.