Hello and welcome to Frontière Farm House! We are Robert and Nicole Goetz, and we’re happy to have you here. There is still a lot of work going on behind the scenes with the website, but it’s coming along. We wanted to introduce ourselves and share a little of the work we’ve done at the farm lately. Our first wedding anniversary seemed like the right day to start.

We closed on our house on December 23, 2016. Being that the holidays were right after that, not a lot of work was done in the beginning. The warm Christmas weather caused much of the snow to melt, which led to the discovery of a cow carcass in our horse pen. This slowed us down on the progress we were making, and is an entire post for another day. In addition to the cow carcass, the previous homeowners left a freezer full of trash in the barn, piles and piles of rotting straw and hay all over the property, and piles of random junk. We’ve cleaned up half the junk so far, but there is still a lot left to do.

In the last three weeks, we’ve acquired three grown chickens, and the two hens have started laying. They’ve also escaped their yard a couple times. We need to repair some fencing, and build up the soil beneath it to close all the gaps. Hopefully, that will stop all the escape attempts.

We have also acquired many other birds. The first purchase was twelve day-old buff orpington chicks. We unfortunately lost one shortly after bringing them home. The stress of the cool weather, being moved in a vehicle, and then put into a new enclosure was just too much for it. The good news is, the remaining eleven are doing great! 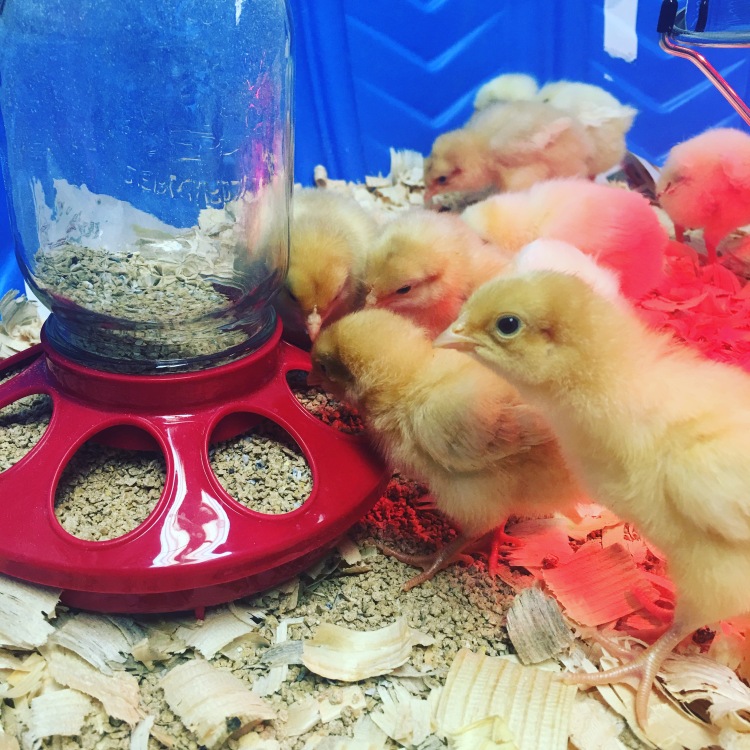 We prefer using mason jars to hold their food and water, especially in the heated areas. It’s easier to see if they need to be refilled, and we have TONS of them. We can also clean them in super hot water. The outside birds have a Harris Farms galvanized steel drinker, as well as a plastic feeder from the same company. The steel drinker is double walled and will stay cooler in the summer, and is less likely to freeze in the winter.

Just this past weekend, we purchased another two dozen day-old chicks, as well as six ducklings. In addition, we received seven week-old ducklings from a gentleman who didn’t realize his ducks were incubating some eggs. They are all pekin/rouen crosses, and are incredibly cute.

So for those doing math, we have two humans, a cat and a puppy (who haven’t even been mentioned), three big chickens, eleven medium chickens, twenty four small chickens, seven big ducks, and six small ducks. Fifty five mouths to feed. Luckily, the majority of them are content eating bugs and weeds. And a large number will earn their keep in five to six months, when they start laying.

We will be back soon with more information about our animals, some tutorials, recipes, and lots more!